My good friend (and railroad historian) John Henderson recently gave me the model of the Valley & Siletz No. 15, a gas car. The model was built by Ivan Erglish and was the subject of a construction series in Modeltec. I picked it up in Tacoma, WA, while visiting John and crated it and shipped it back to New Hampshire.

I put some fresh fuel in it and its 3hp Briggs & Stratton started on the third pull. Here are some shots of it on its work stand.

I took it to the Waushakum Live Steamers Annual Meet, August 26-28, 2005, and found it fun and easy to operate. I even doubleheaded with Fred Motton and his model of McKeen #1 gas car. 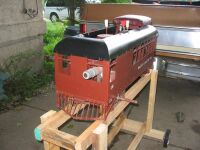 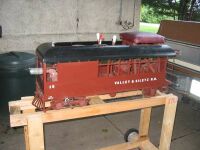 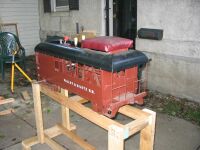 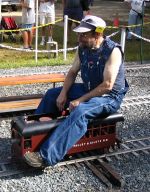 © 2003,2005 Will Jordan. No commercial use permitted without permission. For more information contact Will Jordan.
All photographs, images, and drawings not otherwise credited are by Will Jordan (except for those in banners linking to other sites.)